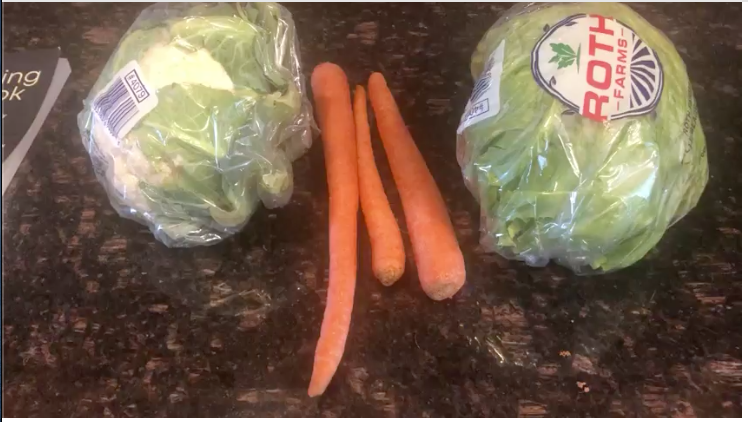 All right. For our second little drink, it’s about two 30 in the afternoon. I’m not really hungry. I was really hungry earlier and kind of put me to sleep and everything, but now I’m waking back up, moving around. I’ve been up for a few hours now where I’m not really hungry, but I’m going to do my little afternoon run in second. So I know I’ll probably new little energy or something. I’m gonna try lettuce, cabbage and carrots. So let’s see what is in each of these cabbage it’s vitamin C and K full late magnesium, magnesium anti-inflammatory digestive health, heart health and cholesterol health. So this is this right here. The cabbage. No, that’s not. This is cauliflower. I’m sorry. I’m sorry. Cauliflower.

I apologize. The cauliflower is vitamin C K B6, full late potassium, weight loss, bone health, and cancer prevention. Then we have, here is our, what is this? Before I started naming stuff, figuring out what it looks like a regular head of lettuce rice. Let’s just go ahead and lenses. So what is called, what does cabbage look like? Oh, okay. I know cabbage looks like I have to think about it for a second. All right.

This is the green leaf, I guess it vitamins a and K potassium, zinc, folate, and I inflammatory sleep aid. Anti-Anxiety reliefs are probably should eat the lettuce before I go to sleep. Like I said, we’re just kind of messing around. We’re going to get better at this as we go. And then carrots, just so we remember, what’s that? Vitamins, AAC, B6, potassium, eye health, skin, health, and cancer prevention. I have a feeling this is going to be gross. Make another video with me drinking it so you can kind of see what the concoction tastes like. But right now I’m gonna cut the video, cut my juices and all that kind of good stuff. And I’ll talk to you later.

I wasn’t really hungry before, but now that I have is beautiful. Greenish carrot is a concoction front of me. I hung my stomach’s rumbling rumble in my tummy. Right? Well, I am a little nervous, full disclosure. I’m pretty nervous. I don’t, I’m not a very convinced that this is going to be very flavorful. Remember this is our lettuce, our cauliflower, right? I was going to say cabbage again, but it’s not cabbage. It’s cauliflower. It’s the white broccoli, right? Our cauliflower. And what else I put in here? Carrots. So carrots, cauliflower and a lettuce. It gave us a decent amounts, brought in a lot less vegetables. I feel then this morning, maybe I made it smells just like vegetables, man. I’m not going to lie. It smells like dirt.

It’s not the greatest. I mean, I would put some sugar in there. Maybe the Apple would be the reason you put sugar in things. But remember until we can, I got to get when I was things to, to peel the fruit, then we can add like more starchy or like different types of fruit towards it. But I got to maintain because we’re not trying to just supplement. Cause if you like, if you’re not gonna, if you don’t eat a whole Apple, right, you’re not going to like, you can eat an Apple, but you’re not eat like five of them. So getting the sugar from one Apple is fine, but getting enough that the sugar from five apples, then that’s not, doesn’t make any sense. So then all we’re doing is just ramping up ourselves with sugar because the amount of vegetable or fruit that we’re we’re crunching up.

So we gotta be very careful on that. And now I understand this is butter, sugar. That’s why for the most part room be trying sugar in the morning times, I might kind of adjust more sugar towards the like right around now, because this is when I do my afternoon workout, but we’re going to try to maintain a very minimal sugar intake as much as possible. Now next week. See, it’s like, it almost automatically goes to my brain. It starts to kind of hurting a little bit. It’s like my brain is like, what are all these vitamins and stuff coming? Or, Hey, this is too much, one time. It’s more vegetables in, in, in the span of 30 seconds that you’ve had in four years. All right. But what was I saying for two reasons, I’m going to use a blender, but we’re going to wait until next week ruin what we’re going to do one whole week of just drinking flavored water.

That’s full of vegetables, I guess, or vitamins, I guess. But to me it’s just flavored water. I’ve had way worse with water. Read the book 12 years in hell. And you’ll see what I’m saying. This is just drop two drops of iodine. This is way better than that. He was used to drinking. So this isn’t really hard at all. Back to what I was saying starting next week, or maybe depending on how I feel when Michael two weeks, we’re going to implement a blender. So I’m going to take some of the guts of the juice that we’re blending up, the vegetables. It makes them with this juice mix them with other vegetables and fruits because, you know, they said that eggplant, even though there’s a lot of nutrients in eggplant, it’s, you can’t really juice it a avocado, which there’s lots of nutrients in avocados and lots of nutrients and, and lots of different. I have two little bananas, so bananas, avocados. I’m not allowed to use so and eggplant. So I want to incorporate the, the blender for that. I think I’m already said that, but you might not have heard that article. So I’m gonna say it again. And here we go.

I mean, I guess I’m getting vested. Like, I don’t know how I’m going to be full, like how I’m going to combat this. The, the, the feeling of hunger as there’s an arm in a way I might drink a liter of this during the setting. Are you kidding me? I would go straight to the bathroom and throw up

Yeah. I’m still not seeing how I’m going to fill myself up with water. Right? I mean, I know it’s full of vitamins and I don’t see it though. I’m not going to quit, but I am. I have a feeling that for this month, I’m going to be starving. I was saying my stomach is going to be this big wall. I probably won’t be starving because I won’t have a stomach. I got a little carrot in there,

Clean up, do a couple things, do a couple of things and then do my run. And if you’re paying it to, if you’re in the FYE fitness part of this, then check me out over there. I’ve been running every day since January 5th started at 10 minutes. Now we’re up to 30 minutes doing an actual workout. This is part of the reason we’re doing the juicing. Just to start amping myself with nutrition and cheating, basically transformed my life and my body and my mind. So if you want to do that, to join me over there, see you later.