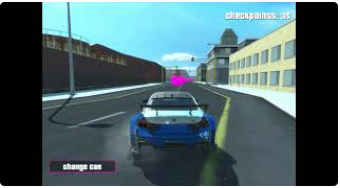 All right. So you use the arrows to get around. It’s not the easiest. So the space guard stopped that. Okay. C is the change, the camera. That’s a bad idea. I’ll get lost. I’m not really quite sure what the point is in the game is to drive around things up really? And it’s nice. Like I said, it’s not easy trying to see if like, if there’s something cool and supposed to do, I don’t know why they gave me such a fast car and I can’t control it, if that makes any sense. yeah. I don’t think that’s exactly what.

So again, I don’t really see the point is, I mean, it’s kind of right. It’s all right. You know, I mean, I’m not really doing much, so more or less just pushing forward on the, on the era space bar. It does a little bit of absolutely nothing for you, so don’t expect that’s going to be okay. There we go. Space bar. Noweight more to go flying now, you know, that’s kind of stupid. Um, well, not quite understandable. I mean, is it, is it couldn’t, couldn’t get myself trapped in this and just play it and do absolutely nothing, but just pause here and play this game. Yeah. I’m not going to lie. I probably could. It’s a pointless game