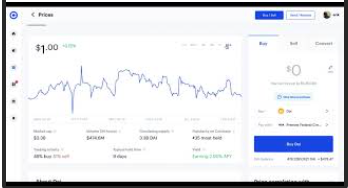 Yo yeah, if this is added money, this right here, and like the huge bops are added money. And if you see when I added money, I, if you watched the videos, then, you know, once I, I added to, I had a couple like little blips went down really bad around April 7th. What I added money, basically, April 2nd, I was really low. I mean, it wasn’t really low, but it was low April 7th. And now we are sky’s limit, I guess. Now the reason I’m making this video, this is a follow-up video. If you want to earn rewards or interest. Right. So if you notice, I love this. I truly do. I love the fact that this is consistently movingForward,

Increasing in value. Every second, I could literally sit here all day and watch this just move forward. It’s amazing. All day long, I’m making money, right? It’s not very much because I don’t have very much invested. So let’s look at something, right? Let’s look at algorithms and da da, da. Yeah. Cause they pay every day. All right. So Dai, I got $400 and all grant, I got a hundred dollars, right? So DIA, which is a $400, which is just sitting there. It’s not very much, it’s not going to talk, going to go down. It’s not going to go higher because remember, if you were paying attention, that class, they’re trying to Mark the $1. All right, Mark. The Mark. $1 corn. So if you want to pay attention to something, let’s look at this.

I have $478 in D a I and the United States coin $242. Now hold on, hold on. Let’s go. Let’s check out the price. Us dollar coin, $1 D I a $1. Right? So when you need to understand what, what it is, if you’re like gain, if you watch that video, it would make sense. What I’m trying to say. They’re trying to market at $1. So D a I is never going to change from a dollar. No matter how many people buy into it. They’re that’s, they’re trying to, to create this as it being a United States dollar coin, right? Mark, Mark. $1. Why does that matter? Let’s go over here.

Look how slow this goes. All right. Don’t look at any of these. Just look at this one. And this one look how slow it goes. First off, look at the percentage, right? 2% 0.1, 5% that in it of itself tells you, you know, if it’s, if they’re trying to Mark the dollar and you’re not making anything over here, but you’re making something over here, 2% to hold your money. Why you decide what you want to do with your money? Just makes more sense to do this. Now, the last three, this one, this one and this one. Well, no, first off, let me let’s do this real quick. Hold on, hold on.

Let’s look at the chart. So you see what I’m saying?

Okay. So this is the entire I clicked. All right. So we’re, we’re over here. 99 cents at peak peak to a dollar and 1 cent. It dropped all the way down to 72 cents. But this is in 2018. So three years ago. And since it has been marked basically

To the dollar, Right? There’s a reason why I’m saying this now.

Okay. Now let’s look at algo. Rand. All right, here we go. We’re going to go all again. Now. What’s interesting is that this was it. I, man, I wish I bought this at 14 cents, man. Oh man, this would be great because what it’s doing, it’s paying you 6% per year, but they’re paying every day. So it’s compounding every day. So whatever they’re paying you, whatever, 6% divided by 365. And then that’s what they’re paying you every day. But what happens is when you compound something, that way it compounds a hell of a lot faster. Now, the reason why I’m saying this is, this is how da AI was pegged at the dollar. This however is not the high of this was a dollar and 86 cents. So the reason I’m saying this is because when, when other people start understanding the value of this, it has the capability to increase in value as DIA does not.

Right? So let’s put it into perspective. It’s going to pay you 6% compounded this, but no, you don’t want to. I already know. So it’s, it’s going to pay you 6%, right? 6% every day at 14 cents and 6% every day at a dollar and 48 or two completely six different 6%. However, like I said, this where I wish I had got it at 10 cents off, man. If I got at 10 cents, the same amount of volume that I bought, right? I think I have, look, I got 71 of them. That same hundred dollars I’d have what a thousand of them give or take. So I’d be making 6% basically every day. Now let’s go back to, I hope you’re understanding what I’m saying. If you don’t it’s okay. The reason I’m saying is look, how fast is this moving? And this is a hundred dollar investment. So I’m almost made 1% back. And I haven’t held this for very long. Let’s look when I bought it. Right.

What I’m talking about is slowly but surely the compounded daily is what’s going to make my money with the upward to objectory of this being able to rise in price. So if they were, if this is able, I mean, if they were to go to 2%, that’s still fine. It’s better than sitting in the bank, but at 6%, if you get in now why to time it finally, everyone understands how well they’re paying. If it gets to $10, then your money has almost basic Orlistat sake. It’s this $15 and your money is 10 X, but you’re still gaining every single day. All right. Does that make sense?