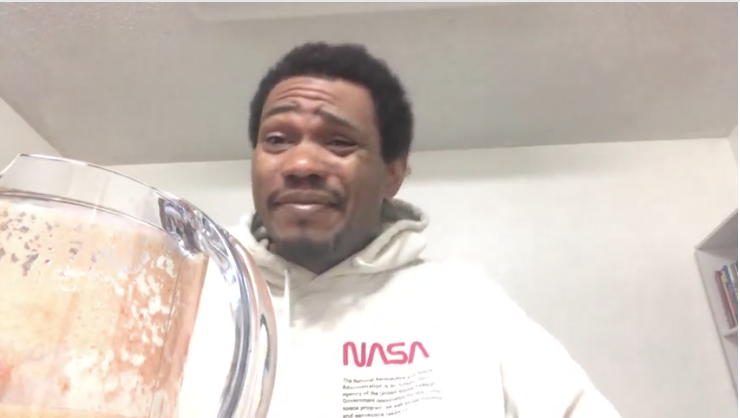 Here we go. Obviously it’s orange because of, I put a lot of carrots in here As

Well. Let me get it in the camera so you can see, all right. As we learned from yesterday, it’s better Stir it.

We also know the bottom part is going to be absolutely horrendous. So I’m preparing myself for that. So I tried to put, you know, more, more strawberries and everything at the bottom. So when I get to the bottom, hopefully we’ll have struggle. Berry juice.

That’s in theory, let’s check it out. Let’s see how, how well or how horrible this is. But this should be a good, this should be good for the morning. Right now. I only had so many vegetables. The more that I understand this are fruits and vegetables, the more I understand. And I, and I kind of get a feel for it. The more exploratory I will be when I go to grocery store, I actually go to the other grocery store. You know, I Harris Teeter because the Harris Teeter has more vegetables in there. They have a much larger produce section than food line. Right. So it’s all, it’s easy. Then we’re getting the springtime. I mean, the farmer’s market won’t really be open right now. It’s it’s only March. If I were doing this in two months, then yes, it’d be opened. I mean more, but you never know. All right, so let’s, let’s taste it. It’s always the, it’s always this point right here where I’m like, Oh man, Oh man. Oh man. Right. Cause you never know if it’s going to taste good. You don’t know what it’s going to taste like. This could be absolutely horrendous orchid

If you, I have to say this. If you ever had middle Eastern food, right. They love eating. And I know this. Okay. My brother-in-law is from Iran. Right? My mom, when we were little, we’re almost was raised at a high, which was based out of Iran. So majority of the food I ate when I was little was either I needed or middle Eastern food or Indian food. What I would, I picked up is a red onion. It is why I like them. Right. I love red onions because in like Persian food, they always leave you like a little red onion on the side. Some of them are like, wow, like I can’t eat it. But other ones are like, yeah, this is, this goes great. It compliments the, the rice or the whatever, just kebab thing they got going on. So it’s really good. Right. with cutting up the red onion, I can taste the onion in it, the onions more. Oh, is the onions more overbearing than any other flavor in here, but it’s not, it’s not a bad flavor. If that makes sense. Let me try it again.

It’s a cluster of, of different flavors in this one. Okay. You know what? I think the onion, the onion gives me that I can feel it right here. It’s the after taste, but it kind of gives me the feeling like I’m eating food. Cause I guess you never really, I don’t really eat just the onion, onion, food, right. But where I can kind of taste the Apple there is no, let’s do it again. I forgot I had a knife right there. The whole reason I did that was tonight.

All right. Now it’s starting to kind of get to me a little bit. Wow. The onion, maybe wasn’t the best idea. It’s really overbearing. Okay. Half the onion. Ah, man, I said at first, the more, the more that goes down, the more, the more it goes down into my stomach, the more of that onion flavor. And I don’t know if that makes sense. Like if you know what I mean? Like the onion, like the ice, not even flavor, it’s the aura of the onion. It’s mighty powerful. It’s kind of giving me like a burning sensation in my stomach and my esophagus. All right. We’re halfway done. We got to it down. So I think the onion half of a red onion, no, a quarter. Cause that was a half, I think a quarter of an onion, like good. This is a little too much.

I don’t taste the walnuts, my butter. I put a decent amount of the bag in there, but I also put the strawberries in there at the same time. So how, I don’t even know if the walnuts gave me juice. They crunched up really nice though. They crunched up real easy. So I know it’s not horrible for the machine. I just don’t know if it gave us any twos. Oh yeah. I gotta finish this pretty fast. I have a feeling, this one, this one might be a cleanser. Right. And this just put it like, it might cleanse me right on up and put me straight to the bathroom. I S I kinda, how I feel right now. I feel kind of bubbly in my stomach. My stomach’s like, what the is this? A stomach I’m experimenting. Right? Cause the onion missed the onion. It’s okay. I want to kind of see. Okay.

It was broad wide and have it in the book. Right. I put a half a jalapeno last night for remember, and that didn’t do anything. Just half an onion. Gosh, I get has this whole area right here on onion, fire. Just like, Oh, I could be just and be nothing, but I didn’t breath. Like onions are powerful. Wow. All right. Let’s go

And so I don’t, I’m not for a believer about onion anymore. There’s a reason why I say don’t do it. Like don’t have an onion in there. It is extremely powerful on my stomach. Like there’s nothing else to code it. So it’s just like straight up. I need, you know, I can feel it, man. I can feel the onion. I know I’m going to be starving here in like an hour. So I’m almost done,

Other flavors. I think there, there, there are I right. You know what I’m saying? It’s nothing new. It’s just, I, it feels like a straight onion. Just kind of like a burn.

No, like if you have ever ate, just take a straight it and put it in there. If that’s what it feels like right now.

Yes. Bad idea. Do not put a half an onion at least Good.

Oh, that Burke was straight on you. So There you go. Do not do not put, Oh man. Onion is a terrible idea. Don’t do it. I don’t know if I can drink it all. I’m sorry.

I’m sorry. The onion, like everything else. I don’t, I don’t want to waste it because that was lost. It was a lot of strawberry, a lot of cabbage carrots. I don’t want to waste it, but that one onion, that onion is, I guess all that’s the only thing I can feel right now is onion. That is it. It got it. Got the flavor of the red onion. It is burning the stomach.