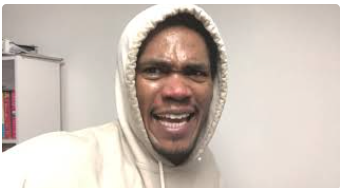 So today I got a surge of energy at the end. It was crazy. I was watching TV and I didn’t realize it was a two hour program. I thought it was only like 45 minutes an hour. So about 45 minutes an hour in to the program. I just got way too restless because I mean, I just finished another book today, so that will be it’s getting approved by Amazon as we speak. So hopefully I’ll be available to the market soon. So, you know, I was, excuse me, I was just all morning having to sit on a computer and knock, knock the finishing touches of that out. So that was, that was exhausting. I’m not gonna lie. But midway through that, I also took a break and rode the bike for an hour. And did my, you know, my floor exercises now, which is, is basically stretching and doing some sit-ups or attempting to do sit ups.

Right. Cause my stomach is not very strong at the moment. So it’s not the easiest process. It burns quite heavily hellaciously if that’s a word. But besides that did the one set before working out before get on a treadmill, which that’s, that was ingenious for me to think of that. Cause now I’m knocking out three sets and by the end, right. So after the second set, after the run, I just finished that and I’m like, I could probably do another one, which is like, what exactly. I’m like, I could probably do another one, which is, is mind blowing. Because if you think about it, I think it was like this time, that this time, last week I was debating on whether even adding a third one or not, we put it before the run and now I’m still debating. If, if you like mentally, I’m not going to do it.

Cause we discussed, I think it was yesterday that we’re going to put, we’ll probably just do another set in the beginning, opposed of doing it at the end. Right. But we’re not there yet. Let’s do another couple of weeks, whatever. Yeah. cardio today was, it was boring. I might have to change up my whole theory of, Oh, all I gotta do is just wash these programs. There’s 50 something of them. So it’s going to take me a while. Well, I don’t know if that’s gonna, if that theory is really gonna work. Cause if I have to continue to watch shows like today, I there’s no way in hell I’m going to be able to make it. I’m just letting you know. Cause it was quite boring. Like not motivating, not stimulating, just kind of, right. So hopefully this was just a and anomaly of the other 56 to 58, whatever how many there are, because that’d be very disappointed if I have to go re, re or go back to finding something that’s 30 minutes since now we’ve amped our game up to 30 minutes.

Now it’s just this, this recap where we started. So if you’ve been paying attention and if you followed along and hopefully you’re better than me or close to me or the same as me, it’d be better if you’re better than me. Like that’s, I would love that. Right? If you’re close to me, not quite there, I still love it. If you’re as long as you’re continuously doing this, if you’re consistent and you’re up to this day with me, Pat yourself on the back, cause 99% of the people won’t be able to last this long, right? That’s just stats. People don’t last very long on goals or on doing things that take up time and consistency. Right? So what we’re in almost 45 straight days of doing this. So again, congratulate yourself, but let’s look back 45 days ago, we were starting, you know, I don’t know if it’s 45 days, so don’t quote me. We were having a hard time convincing ourselves to run 20 minute or 10 minutes. No pushups, no curls, no bike ride. No, sit-ups now in less than two months, we’re running 30 minutes riding the bike for an hour, doing whatever 60 sit-ups and contemplating adding a four set.

So if anyone wants to argue about, Oh, well, you know, 45 days, that’s, it’s think about it. This has gone really fast. And if you think of the growth that we’ve been able to accomplish in this amount of time, it’s exponential growth, right? So the book that I just finished today, here’s the class that goes along with it as well as part reason, it took so long. I made the class last year, actually. It’s like my way of doing things. The steps that I do, things that the, the, how I’m able to accomplish all that I’m able to accomplish. And it’s by breaking things down into my new steps. And so if you’re here at this point, listening to this video, then hopefully you’ve done the same thing and started breaking down other problems that you might have in this by doing the same process that we’ve been doing with working out is do the smallest thing possible. Something that you can not convince yourself not to do, and then start from there. So I’m about to take a shower, but have a good one.