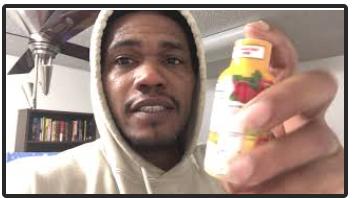 All right. So today we’re all trying to do. I was trying to wait until like five o’clock in the afternoon to run. Just cause you know, you remember trying to test the different times of the day to make sure that I want, I still do it. And then to opening up another Avenue of maybe implementing something different, maybe get a row machine or something like that. Start working, start working on doing something in the nighttime. Cause what’s happening is again, it was happening when we were doing one of the days is past like five o’clock then I’m like done, right? I’ve done my morning exercise did my work. You know, my daily work then did the afternoon work exercise, took my shower, did a little bit more work. Then by six o’clock like my mind is done working. Cause I know it’s basically like 12 hours and, and I’ve noticed that past a certain amount of time, my productivity is just really, really bad.

So I just shut myself off at that point in time because something that takes me first thing in the morning, maybe an hour in the afternoon will take me three hours and the quality isn’t as good. So there’s no point in even trying to do it. It’s counter productive. So in the afternoon I usually do just do my thinking. Right? Cause I don’t, I’m not doing anything. I’m just kind of talking to myself out loud, brainstorming. Right. Well, during that time it’s making me susceptible to want to drink more because I’m done. And then I’m kinda like, okay, I’m done with everything that I need to do. Everything that I planned for the day is done. So it leaves too much time open to where I don’t want to revert back to negative traits. So trying to test later on in the day. So if I can keep myself active later on throughout the day, then that gives me less time to where I can revert back to negative habits.

Right. So that’s what we’re going to try to test later on an afternoon. Well, that’s very difficult because I get bored and the longer I sit, the more lethargic I get and the harder it is for me to get up and do something. Right. So we’re kinda, I mean, it’s just kind of day one. I, I don’t think I’ll be able to do it tomorrow. Cause I it’s just, the days are really long in between workouts. And if you’re waiting all day kind of staring at the clock to work out, it it’s great. Cause you, don’t not going to do anything, you know, to, to ruin your, but it’s also kind of like, yeah, I’m twiddling my thumbs for hours upon hours. So I mean, am I working? Yes. But then I’m also when I’m reading, when you need a break or something, which would be a perfect time to go work out.

I’m not. Cause I was staring at my clock and being like, well, you know, trying to work out a little later on, so I’m going to adjust the schedule. Just same for you guys if you know that that’s, what’s so great. Especially with coronavirus is a lot of us are kind of working from home so we can decide like which part of the day is the best time to work out. I mean, I know if you have kids, it’s a little difficult, however, there’s nothing wrong with teaching your kids to start or, you know, instilling good health habits when they’re young, because I know they need exercise too. They need recess. All right. So if they’re cooped up in the house all day and all you’re doing is giving them video games to do to play. Then that’s, you’re setting up for a world of hell later on.

Cause they won’t know how to deal with the built-up energy and the all they’re just sit down and not in this waste, all that energy and then obesity and other things come into play. But it’s for a different topic, but yeah continuously experiment. I tried the so far, you know, with the health part, I tried the lemon water for a day. That didn’t really work for me. I still have some lemons, so I probably need to try it some more. The Apple cider little shot thing. Let me show you these things.

What is it? The white house detox, organic Apple cider vinegar with mother. Those are girls. All right. It’s better just to drink the Apple cider vinegar by itself. All right. Which I need to do. All right. I’m really lazy on part two. All right. So I’m getting down with the exercising every day, which Ooh, good job. However, without working on the health, the food, cause this is only one of the battles. It’s kind of like a, it’s more like a three, three edged sword. You got your, your body health, your mind health and like nutrition, right? Like exercise more or less. I got to exercise your body, your mind. And then you have to worry about like what you put in your body. Right? Cause that’s the most important because your, your body needs the correct nutrition or nutrients to perform at optimal levels. And so does your brain, so you have the two at two edge sword right there. And the triple factor that trifecta is right here, which is nutrition. Right. So we’ve got to focus on that third part, the nutritional part. So you guys liked this video a little longer and I kind of rambled a little bit, but whatever. Keep on going, stay strong and never give up.