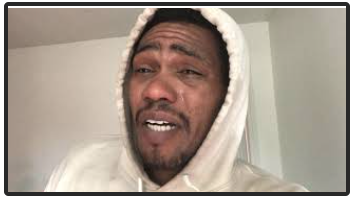 Today. It was really difficult. The run, not so, not quite so much. Well, about 27 minutes, I was, I was really tired. I mean, to get to three miles, it was 32 minutes today, but it’s, I’m just, I’m exhausted then the second, I mean, halfway through the first set I was, I was struggling, really struggling bad. Second set. I give it to me and I had to really kind of gathered myself and second set. It was not any easier. It was still really difficult. Even right now, like I’m, I’m exhausted, man. I’m exhausted. Not from the workout or as you see, I’m not huffing and puffing. Like I used to be, I am a little bit, but not really. It’s just, I’m exhausted from no food. I get this morning. I took, I had a big old thing of juice, a drink, the whole thing. I’ll leave it as more of a vegetable water put me to sleep. It did. I mean, I’m struggling, I’m struggling hard. I really am struggling really hard with this. I’m hungry and then I’m just sleepy all day long. I don’t really want to get out of the bed. I never realized how much I like food. Like not just food. It’s just like the simple fact of being able to go and just grab a banana and eat it or grab a snack if I want one, but it’s challenging. We’re going to do it. What I’ve read is everyone has challenged first few days. So again, let’s see if we can make it through these first few days, come Monday, then we’ll start complaining for real. Right. Then we were really complaining if, if I’m still really tired and can’t do any of my daily things, like it’s really, even, it’s hard to focus as well. Right? So I don’t know if you’ve been following me this entire time, kind of my mentality. I’m all very goal orientated. I like to work hard. I like to wake up early. I like to get things done Yesterday and today it’s really difficult to focus. And on the whole reason I’m doing this is to focused. So it’s counterproductive at the moment. It’s difficult for me to do anything, but we’re going to push on through. We’re going to do it. And sorry, I didn’t mention too much about the fitness, but hopefully you’re following along with me and you’re, and you’re with me. And you’re like, okay. So it’s not just me that thinks this is an absolutely horrendous idea and it’s terrible. It’s it’s Erik as well. He thinks it’s terrible too. So hopefully through that, we can motivate each other to keep going, keep, keep, like, you know, there’s always a light at the end of the tunnel. So let’s just go through the tunnel. Let’s keep pushing and make it through. And hopefully we, we get what we want out of this. All right. I’m going to take a shower.