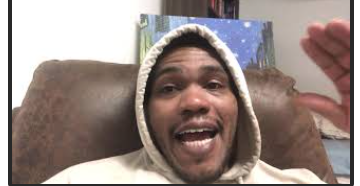 I want you to understand that this is a struggle for me. Right? I don’t want to do this most of the time. I don’t do. I understand the after effects the benefits that’s going to come to my life. I have faith, right? I faith. I don’t believe all the Hocus Pocus. Well, sometimes you just have to have faith. Like today I was going to convince you guys it’s okay to fail. I mean, it’s kind of coming, becoming a theme at least once a week or something. I try to convince everybody and give everybody excuse why I couldn’t do something. So even though we’re this far into this,

I still try to find a reason to quit. Do I like that about myself? No.

Do I like that? That I can give up that easy.

Has how much lack of determination I had this morning or this afternoon? It’s like six o’clock. I was convinced

Going onto the treadmill. I’ll just walk as long as I stay on this treadmill for 30 minutes. I’m all right. You know, first I was like, all right, just do 10 minutes and commit just to be in a failure. But then once I got gone and what we’re trying to do, remember, we’re trying to manipulate that reptile part of our brain, which is the back part. Take the class six strategies to conquer your life. Go into that just a little bit more,

That’s the autonomous part of the brain. What happened when I got on that treadmill and I started to run was not the frontal part. The cortex, the, the, you know, the creativity, right? The creativity was working against getting on the treadmill. It was trying to become creative and figure out how not to do it. It wasn’t the fight or flight that got me to do it. It wasn’t. So, which is the midbrain, right? The amygdala. It was the reptile brain, the autonomous brain that got me to start running because I’ve done it so many days in a row. Now it’s become second nature to where my reptile brain knows when you’re on this treadmill, you run right. Not walk.

Now. I hope part of my goal for everybody through this is our autonomous brain takes over right to where this becomes such a habit that it’s impossible for us to say no to. Right? It was so easy for me to convince my cortex and my middle. My mid-brain like my emotions and everything to convince me I wasn’t going to do it. My cortex came up with some jazzy, jazzy excuses. My mid-brain confirmed each excuse with emotional rationalization for why I could not do something. But then the only thing that shut all that off is the most powerful part of the brain, which is the oldest part, the autonomous part, the reptile part right

If you think about it, that’s the same core reason why it’s so difficult to change, right? It’s so difficult to change because we only try to change the front part and the mid part, we try to change our ideas, right? That’s the change your mind and everything will be fine. All right. Change the way you feel. Right? So change the way you think change the way you feel. Those are two great things. Don’t get me wrong, but you’re missing the third part. The repetition to where it becomes anonymous, autonomous, excuse me. Right. You don’t think to sleep, your body’s just go to sleep. You don’t think to wake up, your body just wakes up, right? If you’re hot your, your, your reptile brain space is like, Oh, I’m overheating, overheating. And then it tells her as your brain wake up and you’re like, man, I’m hot.

All right. Or if I got to go to the bathroom, then it tells everything, wake up, wake up, wake up. So then you don’t pee on herself, right? So, but when you were younger, you peed on herself. So it was a habit you had to habitually learn to not pee on yourself and not pee. When you went to the, when you, when you’re asleep to wake herself up and get out of that bed and go to the toilet, or you peed on herself. That’s why, when you’re really pissy drunk and you pass it out, you’re more susceptible pee on herself, throw up on herself and all that because your body can’t wake you up. All right. To tell you like emergency, emergency, emergency, get up, get up, get up, right. The reptile brain can’t reach the front enemy. All right. So we’ll get you up.

So positive way of thinking emotions, great. Or, you know, keeping your emotions in check. Great positive thinking. Great. But the final icing on the cake, cherry on top is repetition to do something so many times that we convince our animal brain that it’s normal. And that this is what we’re going to do. This is why I tell people. And I mentor a couple of people right now. And the first thing, what I had them do is write something on the wall so that they’d have to see it every single day. Right? And by doing that, by looking at this every single day and saying it to yourself every time you see it, well, every time you read something, you are actually, you say it in your head out loud, but say it out loud to yourself, right? Every time you see your little goal and he sent something back to him, I said, no, no, no, I can’t.

I can’t put this up there. It’s not a goal. It’s not a vision that you can see. It was like on the road to riches. I said, if I see that, then the only thing I’m going to be seen as a road, right? I’m up in my, my, my autonomous brain and my reptile brain is gonna be thinking of a bloody road. It doesn’t do me any good. If I think of riches, what is richest? Richest doesn’t mean anything because that’s in the eyes of the holder. So I said, I gave him a particular date. I said, remember that date? And then I gave him another one, beat me. Right? That’s a goal. That’s something attainable. That’s, that’s something that you can hold. Right? I can’t think of the word, sorry. Or I was like, if you want to think of riches, don’t just think of the word riches.

Pinpoint. Exactly. Tell your autonomous brain exactly what you want. It’s just like, if you’ve ever done computer coding, you can’t leave room for error. When you’re programming something, you can’t leave it for thoughts. You have to program every thing. So if you want to do the whole thing, well thinking vision and all that kind of goodness, you need to envision exactly what it is that you want. Because if you don’t envision exactly what you want, you’re not going to get it. Does that make sense? And I’ve already talked in eight minutes. So I got to go and take a shower and move on with my life. Again, the only thing that got me was the autonomous part of my brain. That’s why I ran it. Wasn’t desire. Wasn’t determination. Now that, I didn’t want to do it. I wasn’t going to do it. I had my frontal part, my cortex, my middle brain, my emotions were already convinced I was not going to run.

It was the reptilian old part of the brain, the autonomous part of the brain that, because I’ve done this so many times and it knows what is expected of it in this situation. I ran. So make sure that you conquer, not just your front part, not just your second, but conquer your third part as well. Now, again, I say this numerous times in, throughout the book and through all the books almost, I don’t fear the man who can punch a bag a thousand times in a day, I punched the man. I fear the man who complains that same bag I thousand one time a day for a thousand days, repetition, repetition, repetition.