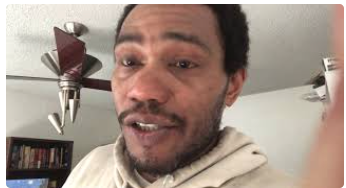 There’s a little booger in your, on the phone where you can see he. Well, I was, the one was impossible for you not to see it anyways. Today was a good day. I’m not going to lie. I, it started to get like, you know, spring is upon us almost. So it’s getting warmer, which is lovely. I will say for some reason, like it’s burning more in my chest. All right. The like today I did eat some pizza before I ran, so that could be a little bit of just heartburn.

So for the first, Literally for first 15 minutes, I was trying to convince myself to quit, but I was watching something on Michael Jordan, like I want to say motivation or something stupid. So of course, when I’m watching that about motivation or determination, I’m not going to quit in the middle of watching something about exactly what I was trying to do. Right. So that’s why gave me that extra little to keep going, I guess. Excuse me. What else? Yeah, I think my, my muscle was just kind of like typical, like little sore that’s about it.

I Got stretched more, probably drinks, more water the water I am drinking. I think I’m sweating it right out. So we’re, we’re probably amped that up a little bit. My little surprise. I don’t think I’m going to do that at the moment. I’m still going to do it, but put it off a little bit. Cause I do want to, I want to optimize myself for someone like how I was talking about a week ago. I want to try that whole vegetable diet for at least, you know, a good couple of weeks. Excuse me. I want to flush my system and kind of get all the impurities out. I think that we’ll have a better, a better effect on me then going to do my other idea. So I think I’m going to try to, you know, truly flush my system, get out all the impurities and then can maintain like, just keep doing what I’m doing because in the morning I’m, I’m riding the bike for 20 miles, which is good, but kind of hurts every now and again, but whatever that’s expected do, one of my sit-ups can kind of feel my stomach getting a little bit tighter, which is good to probably amp that up a little bit, do some more sit-ups I’m doing 30 minutes on a treadmill, which is just, just think, man, it’s been less than two months.

And we went from 10 minutes to 30 minutes on the treadmill plus add another hour. So X month of growth, of course we’re there. So I hope you guys are with me and been doing this kind of upgrading a little bit about how I’ve had we still got until Thursday to try to do the four, which I might try to do that tomorrow. Two sets in the morning, but one or two sets before running what I’ve noticed that sets always harder, right? I guess it’s my muscles aren’t warmed up. But the set before this sets like running is always way harder. So I’m gonna figure out about that. But other than that, I mean, after I ran it, then I feel better. But during the run I wasn’t feeling it was very quick. So that’s kind of the motivation to keep going is eventually once you get past the pain is you’re going to get to the glory as long as you just don’t quit.