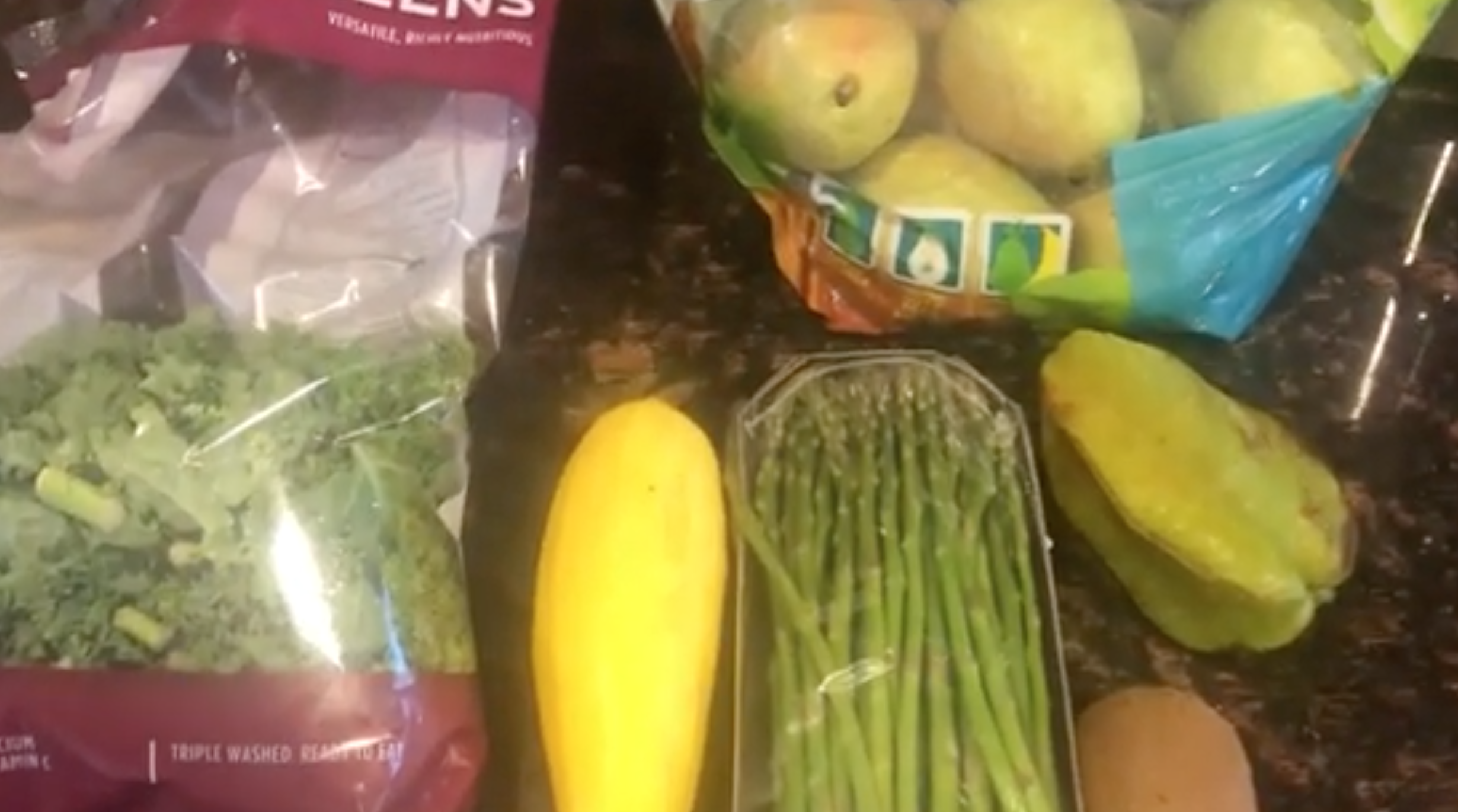 Good morning had a little bit late start this morning, went to bed a little late last night. My apologies, as you can see it’s daytime now, I think it is probably seven 30, 30 in the morning. Um, and it’s starting to get springtime today. This morning. We are going with the rest of the bag of kale. If you remember yesterday, I was pretty disappointed with the amount of water that was in here. Um, but whatever, maybe I should get it where it’s not cut up, but we’ll worry about that later on where you are trying some payers and turn it around. There you go. These are sweetcorn may pairs. There you go. Yeah, that word does Johnno pairs. We were trying, uh, what is this squash little squash in there? We’ve got asparagus and we got our Kiwi and then I saw this. It looked cool.

I think it’s a star fruit. Not really sure what it is. I doubt it’s in the book, but I wanted to give it a shot. See what happens might be the, the missing factor that we’ve all been looking for. Right? So let’s go through each vegetable and discuss what benefits we are getting out of it. So, uh, squash remember in the morning times, okay. We’re, we’re trying to have more of a sugar, right? More, more sugar in the morning, less sugar at nighttime. So more greens at night, more fruits in the morning time. So that’s why we have three different fruits. We have three vegetables as well, but that’s more or less for the water and you know, a couple of the nutrients, but the pair, the Kiwi, and the funny looking fruit peanuts, a star fruit, I could be wrong. Those are for the morning time. All right, let’s go.

Uh, duh squash vitamins, a C E N B six. Nice. In diabetes management anti-inflammation and lung health. And we got kale and asparagus that’s over here. Kale, we got vitamins, a K and C magnesium cholesterol, health, cancer prevention, eye health, and weight loss. Then we have asparagus. Remember, this is what asparagus looks like. Vitamin C K, and eight, full late digestive health, blood pressure, pressure. Excuse me, pressure regulation and weight loss. Now, remember this is out of the green juicing recipes, recipe book. If you want a little tag along, uh, if you’re doing this with me, when I, uh, see what’s going on, uh, that’s the book that I’m using, all right out of our fruits. Don’t we’ve got pears key. We, and I think star fruit. So let’s go to pairs. Here we go. There you go. Vitamin C and K potassium, digestive health, weight loss, immunity, boost, kidney stone prevention and heart health.

Hmm. That’s good. That’s nice. Um, then let’s go to key wheat. Where did it go? There it is vitamin C K N E folay potassium. Anti-inflammation respiratory health, digestive health, immune immunity, boost, eye health, blood pressure regulation. And then starfruit. But I doubt that they have it. So we’ve got strawberry raspberry pineapple, blah, blah, blah, blah, blah, blah, blah. No, no. So just kind of like our peppers. We’ll have to figure out what, what it does for us later on, but it was fun. It will be fun. And hopefully it’ll give us another, uh, a new flavor, right. Something, something unique. All right. See you in a minute.

All right. So part of what’s fun with this is we get to learn new things, all those vegetables. Now I didn’t do the whole bag of pears. I actually, I did two pairs and, you know, we’re trying to just keep the one. So I went above and beyond what I was supposed to, but it didn’t give me any water. Didn’t give me any juice. Right. As you can see out where we’re trying to fill it up. So I didn’t want to just keep on putting more and more pairs. Right. I use all the asparagus I use out like most, everything that was there besides the pairs. That was the only thing I could have kept putting them in, but that would defeat the purpose. And we’re just adding a lot of sugar. So mental note for the morning times, we need to put more of like a cucumber in there. Uh, maybe a couple of cucumbers because cucumbers are one they’re for hydration too. They’re there. Um, there’s a lot of water in them, so it would fill the cup up faster. Um, even maybe an orange, we might try an orange coming up. Uh, there’s a lot of different fruits that we can try. Um, I’m not the biggest grapefruit, Fran grape fruit, Fran fan, but you know, that’s always a, I mean, there’s a faster way of different things that we can try. Now, let’s get our, our knife stir up.

This is going to be an interesting one. What did we put it in? We put some the squash, which I don’t think that’s going to have any flavor. Uh, the kale is literally like this much in there. It wasn’t even enough to, to even talk about what other, the asparagus, asparagus, I think there’ll be a nice flavor of asparagus in here, but asparagus doesn’t taste like anything either. So we got really just our fruit, the funny looking fruit, which I think it was a star fruit, passion, fruit. I don’t know that one will be decent. Um, I gave it a decent amount of juice. Uh, Kiwi gave a decent amount of juice and then the pairs gave all right, Mondo juice. I think it was the, really, the squash gave the most amount of juice.

I’m trying to see what it tastes like. I mean, it tastes like, like, like I’m drinking vegetables, Like trying to figure out what, what is the distinct flavor as MC Oh, you’re wrong? This is good. It’s a cool, there we go. I can taste a little bit of the kale,

The Fruit. I don’t taste any of the Kiwi. All right. The new flavor, flute, whatever, whatever funny fruit I put in there. No idea. It doesn’t taste like anything. However, I mean, I’m thinking, I mean, I know I’m getting the sugar, I’m getting the, I’m getting the stuff that I want. So there’s no complaints in this. Don’t get me wrong, but I, I can’t taste it, which is a good thing. This, this one has, let me taste it again. This one, this one’s not bad at all.

I guess I can taste the pear, but then it’s kind of second guessing me. What does a pair tastes like?

I mean, cause Apple juice, orange, like orange juice and, and like, uh, pineapples. They kind of taste like their juice, but Apple juice doesn’t really taste like an Apple all the way, all the time. Just like a watermelon flavor. Doesn’t taste like watermelons to me, like watermelon tastes like water. That’s something. There we go. There you go. We could do melons the morning time because the melon a day will keep the glass full each way. That was really stupid. I’m sorry. It didn’t even Ryan. Well, Oh well, but this is not bad at all. I don’t have any complaints. It’s, it’s kind of, I don’t want to say bland cause it’s not bland. It’s just not, it doesn’t have any robust flavors. Like the last few days it remember.

Like, uh, if you remember the last few days ago when we did the onion, that was wow. Last night with the pepper. That was a little, little Tingey. Um, I think we’re, I want to put some, I’m probably going to put some ginger, like not, not the whole bloody thing. Cause then I won’t be able to drink it, but maybe just a small little bit of ginger. I might add that with this. I mean, again, I’m, I’m working very diligently on a project that’s different than this taking a lot longer than I thought it was going to,

Yeah. Click this link right here, whatever, wherever it is. And you can see what project I’m working on. However, um, once I’m done with this program or this project, I’m going to really dive into the vegetables and all that kind of stuff. Cause I have a, quite a few books on, well, let me just show you, hold on. Here’s one right year, as you see, I already started a little bit. It’s the green pharmacy guide to healing foods.

So with this book, I mean, it’s, it’s kinda like the other one, but it, it kinda, it like, but it goes way more in depth per, per, um, per vegetable. Right? So right here and this, uh, like onions and garlic yesterday, we were looking at onions a couple of days ago, onions and garlic contained, curious to 10 another anti-histamine that acts like vitamin C to lower inflammation and give you relief from allergies. They’re major ingredients in my sinew soup, which also includes hot spices, such as Curry, horse riders, hot pepper mustard seed, and black pepper. So what this is gonna, this is gonna help us like more with the peppers and the herbs and, and just expand our horizon than just drinking straight vegetables. Like the book that we have now, they have the super foods. So that, that book is great. If you want to like get yourself beginning, but more of a at advanced, uh, status, then that’s where I’m going to try to take myself over the next couple of weeks.

Yeah. We’re still going with our, but yeah, I think tomorrow morning, uh, at, uh, I’m gonna go to soar and get the different, different, uh, fruit to play with. Right. But then I’m also gonna keep some cucumbers on the side, just as a, to boost in the hydration to one, to fill the cup. Right. Cause I didn’t fill the cup, so I need, I need a filler. Right. And cucumbers are great. Cause it’s mostly water

And you could be like, well, why don’t you just add lettuce? Do not forget lettuce in the book. It says lettuce sleep aid. So lettuce is a nighttime drink. Not a Maureen time drink

So you can tell this isn’t that bad. I got a little laugh and I’m still gonna drink it. Would that cut the camera?