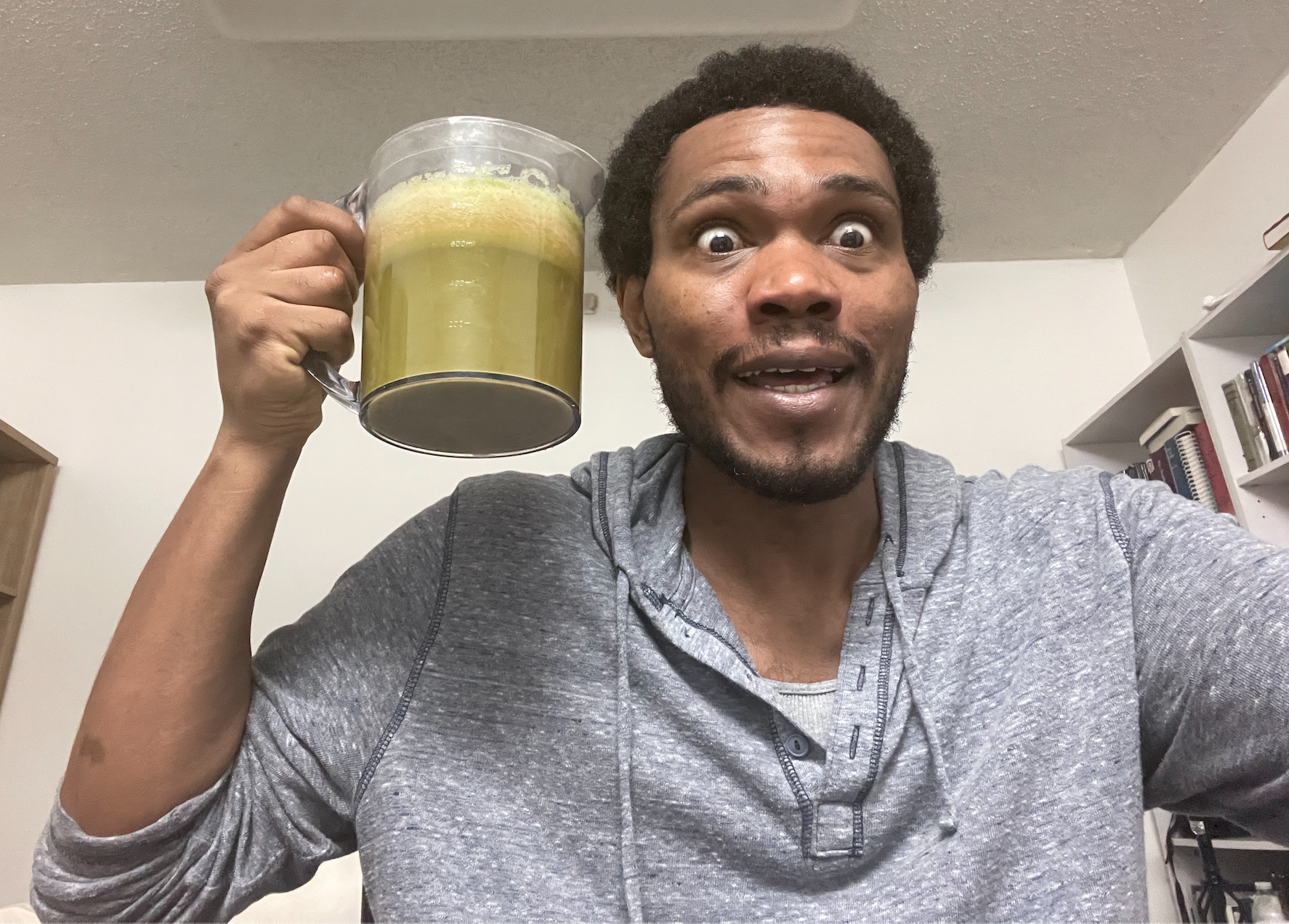 All right, let’s move this down just a little bit. So you can, there ya go. All right. This one has a little bit of foam like normal. Let’s go ahead and get rid of this foam. Cause I, I prefer not to drink it. If you enjoy foam, be Mormon, be my guest and devour. As much as the foam is, your heart can take. Look for me. I’ll do without it. Alright, well, there’s still a lot more, but it’s kind of, it’s a goopy foam. So what we’ll do with that will be fine. Let’s give us a mix just to recap. What’s in this green drink, it is our afternoon kind of settled down drink. So it’s the intention to kind of release our anxiety for the day. Give us a peace of mind and aid us in our sleeping so we can get that those full, I don’t believe in the whole eight hours of sleep, but I do believe that deep sleep, you need to replenish yourself and read kind of reboot. So this is what the art afternoon drink is for forced to kind of kind of boost our, our, our nighttime in this drink right here. What we have, we have lettuce, some bok choy. We have some asparagus, we have some sweet potato. We have a couple of apples, we have a melon and we also have a zucchini.

So with that with no further ado, let’s give it a try. I shouldn’t have done that. Now. My hands are wet.

We also have celery. So if you didn’t notice when I discussed foam that’s more or less what I’m discussing. All right. I don’t really want to drink that. That’s not the greatest. So the flavor of this is very different. It is very grassy, kind of a, you can tell this is majority grains. All right. I understand. If you watch the last video or you’ve watched the last section, you’ll see that the melon gave us out. You’ll see that the Mellon gave us the most amount of juice, however, tasting this doesn’t taste like the melon

Okay. Okay. It’s a Melanie celery kind of flavor. It’s different to explain. It’s not bad. You know, I was gonna put the, a beat in here, the beat. I’m not like a beat fan. It’s not like it’s the greatest thing in the world. However, the flavor of the beat, I think, would compliment the Melanie celery flavor. I don’t really taste the bok choy in the lettuce quite as much, but the celery gives it, excuse me, that meaty flavor, that meeting that meaty consistency and well, the melon gives it kind of that, that sweet flavor. You can kind of taste the Apple on the way down, which is nice, just because it gives, it, gives it more of the Apple, a sweetness to it. Let’s continue to drink.

No, that’s good on ’em. I’m not going to lie on the smell alone. If you were to just smell this and not taste it, you would probably not want to drink it. It doesn’t have the greatest smell. Right. It’s kind of smells like I went out to the garden and was rummaging in the garden with my hands without gloves on, and then just smelled my fingers. And you know, your fingers would probably smell like a Ray of different vegetables but array of different vegetables mixed with dirt, right? So that’s kind of where I’m at. It’s a mix. It’s a Ray of different vegetables mixed with dirt. That’s, that’s what the smell, that’s what it smells like. Excuse me. But the flavor, the flavor is, is very unique. It has a lot of going on in here. It’s again, you can, it has a meatiness with the celery and it has the Melanie and it has a little bit of that Apple

I mean, the biggest complaint that I’m going to have is like normal. It’s kind of repetitive. Now. It just, if it was cooler, right? If, if the drink was, you know, you can’t really see it now, or we’re down here. If this drink was maybe let’s go 10 degrees cooler. I don’t know that might be freezing, but if it was a few degrees cooler, it would be a world of better. So what I did, I full disclosure, I just did this today is because I keep complaining about it. So if something’s a problem, then just come up with us. So it looked shin. So my solution was just to put all the F I was going to put it all in the freezer, but I was like, you know what? That might not have the correct all my citrus, or put it into the fridge.

Now, if it doesn’t provide the freezing ness that I want, then I’m going to stick them into the freezer. And then I’m going to have ice cold juice, at least in theory, I might ruin my dead machines, but it won’t be the first time I’ve broken something. And it most likely will not be the last. Now this is coming down. I’m a little nervous. Cause we’re getting close to the part where the foam is going to come and I’m not nervous as in a bad thing. I just know that the foam is coming in relatively quick and the foam is not the greatest. It’s relatively gross. So we’re getting close to the end of this video.

It goes down really well. I mean, I can’t say it’s a difficult drink. What, I want to drink this on a daily basis. Probably not, but you know, if I mixed it in every now and again and, and had this recipe, Hey, why not? It’s not, like I said, it’s not horrible. It’s not something I want to drink on a daily basis, but maybe like once a or once a month pop it in, we’ll see the after effects right now. If I sleep sound and bright eyed, bushy tail, first thing in the morning, then I might be like, well, I found I solve the problem. Let’s go make some more of a I don’t even know what to call it. Right. This Kind of a vegetable green vegetable

Mama JAMA. That sounds terrible. We need to come up with a better name next time. Let me know the name. So I’ll phone don’t no, you see what I’m saying? That’s foam. I do not want to drink that. All right. See you later.